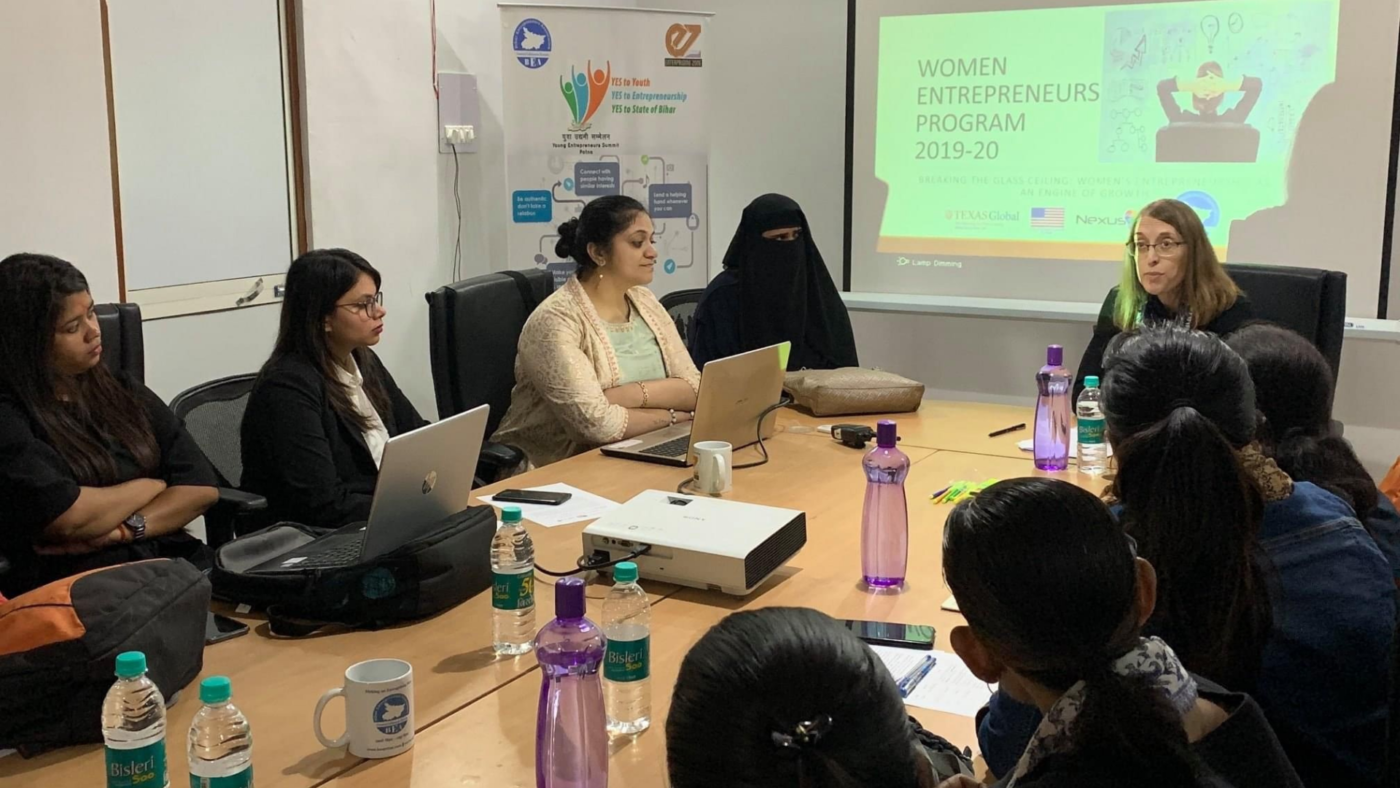 Despite progress in recent years, women seeking to get ahead in India’s business community still face many challenges—the World Bank estimates that in 2019, women accounted for about 21 percent of the nation’s workforce, less than one-third the men’s share of about 76 percent. The situation for women entrepreneurs may be even more problematic. Entrepreneurship among women is considered a vital component in boosting the economy through job creation and delivering transformational social and personal outcomes for women. But women-owned enterprises represent only 20 percent of all enterprises in India, according to a 2019 report by Bain & Company and Google.

To help address this issue, the U.S. Consulate General Kolkata, in partnership with The University of Texas at Austin and the Nexus Start-up Hub, organized a hybrid-style boot camp for 25 women entrepreneurs from eastern and northeastern India. The boot camp was part of the U.S. State Department’s Breaking the Glass Ceiling project. The term “glass ceiling” refers to an invisible societal barrier that hinders women’s advancement in business and other fields.

“The program enabled women entrepreneurs to overcome the barriers of entrepreneurship by growing their network, developing an ability to scale-up and pitching to raise funding,” explains Divya Rajput, program lead for the project. “Very importantly, they collaborated to share resources where necessary, rolled out new products and they did not let their ventures die but scaled up during the pandemic.”

The boot camp addressed real-world challenges faced by entrepreneurs such as improving their company’s access to their target market and seeking funds from investors. There were also real-world results—at least nine of the participants were connected to potential investors, Rajput says.

The program overcame some challenges of its own. Originally scheduled for April 2020 but delayed by the pandemic, the sponsors kept the project alive and then organized a part-online, part-in-person boot camp that took place in Kolkata in April 2021 while observing strict social distancing norms.

“To keep the momentum going, we conducted a series of webinars with industry experts and conducted online mentoring sessions with our participants,” says Rajput. “We also kept them focused through one-on-one mentoring sessions. So, all this while during 2020, we made ourselves available to their coaching needs and helped them grow their network. As a result, at least 50 percent of them kept their ventures alive or launched new products.”

Women entrepreneurs from eastern and northeastern India representing a variety of fields attended the boot camp online. Among them was Sudeshna Mukhopadhyay, co-founder and chief executive officer of Techweirdo, a Kolkata-based technology firm that uses data analytics and applied artificial intelligence (AI) services to work with businesses in industries that include manufacturing, healthcare and finance. 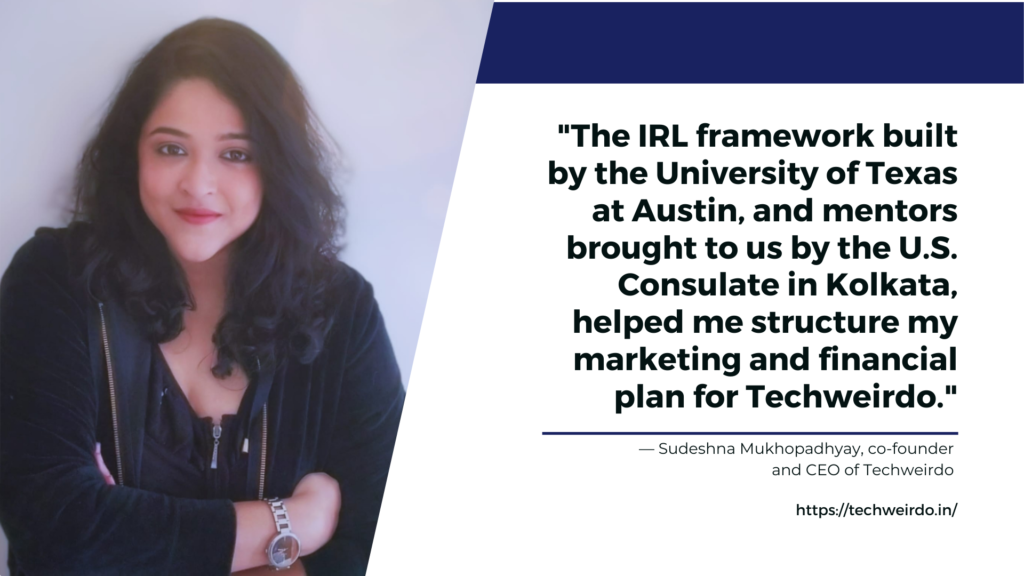 “Techweirdo is an ‘AI as a Service’ company that works as an innovation partner to enterprises in identifying their automation needs and developing and implementing pre-trained AI models to boost their operational efficiency and their topline growth,” says Mukhopadhyay. “Strong private and public partnerships have helped us build a strong global customer base.” She adds that 35 percent of Techweirdo’s revenues are currently accrued from the United States, Canada and Australia, and 65 percent from India.

“The IRL framework built by the University of Texas at Austin, and mentors brought to us by the U.S. Consulate in Kolkata, helped me structure my marketing and financial plan for Techweirdo,” says Mukhopadhyay. IRL, which stands for inverse reinforcement learning, is the field of learning an agent’s objectives, values or rewards by observing its behavior—basically about computers learning from humans.

Mukhopadhyay also founded a separate, second firm called Bundl Health, which grew out of “a personal experience of facing the glaring gap in availing holistic (health) care” and which intends “to make (health) care accessible, incentivized and seamless,” she says. “Bundl Health was a research project which we had been working on for quite some time and I finally pitched the idea-stage product during the boot camp.”

Bundl Health’s AI-enabled technology platform helps healthcare companies deliver and grow as patient-first organizations. “The platform is at the pre-launch stage and is being incorporated as a for-profit company,” says Mukhopadhyay. The team of five is currently building the product to give hospitals, labs and clinics an opportunity to set up a complete remote care wing within minutes after onboarding.

In addition to helping healthcare companies, Bundl Health has also developed a web application for patients. “Bundl Health’s mobile app offers convenient access to high-quality care services for patients recovering after surgery at home,” says Mukhopadhyay. “It automatically manages the treatment schedule, so they do not miss anything (medication, reviews, lab tests) and their family and care-service providers are always aware of their progress, thus giving them a better chance at improving their treatment outcomes.”