Sampriti Bhattacharyya has developed underwater drones that could help in rescue missions and explorations, as well as prevent radiation leakage under the sea. 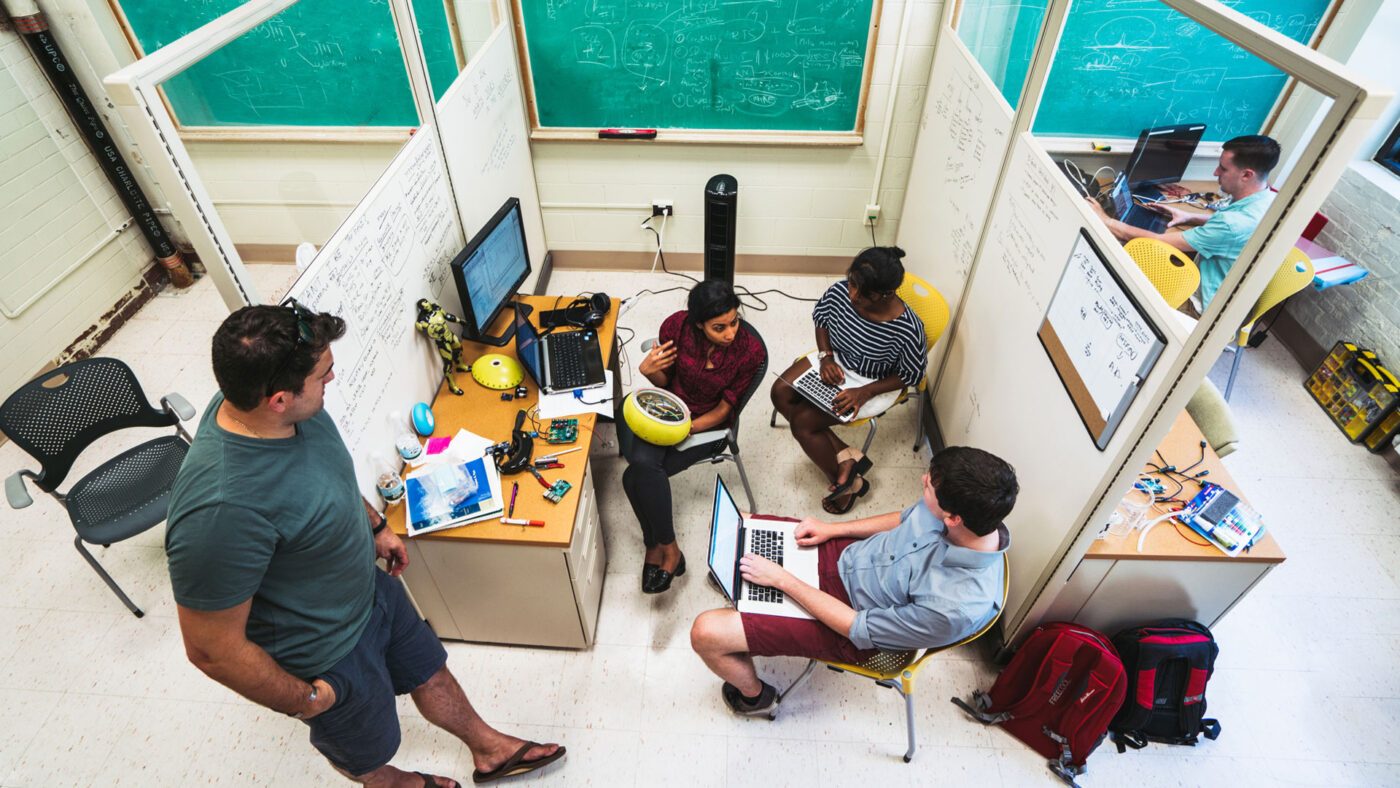 Sampriti Bhattacharyya (center) holds a prototype of the underwater drone as she talks to the Hydroswarm team at the Massachusetts Institute of Technology. Photograph by Lillie Paquette

We usually associate drones with smart machines that fly in the sky. Hydroswarm, a Boston-based start-up founded by Sampriti Bhattacharyya, is introducing the world to a completely different use of drones—underwater. The company is working on developing new approaches to marine conservation, sustainability and preservation.

Bhattacharyya developed football-sized autonomous, underwater drones while pursuing her Ph.D. in mechanical engineering at the Massachusetts Institute of Technology (MIT). These drones are expected to open new possibilities for ocean exploration and maritime big data. She is also the co-founder of Lab-X Foundation, a Boston-based nonprofit organization committed to providing hands-on opportunities and global exposure to students.

Growing up in India, what were your earliest interests?

When I lived in Kolkata, I had access to the Discovery Channel on TV for a couple of hours. I was fascinated by a documentary on the Mars rover missions. I was really intrigued by outer space, robots and NASA. I wanted to be an astrophysicist, but there were very limited options.

What led you to the United States and what do you feel are some of the biggest differences between Indian and U.S. colleges?

The majority of undergraduate colleges in India are very different from those in America—most of them don’t provide any hands-on experience and there are barely any resources available to do much building. A close friend told me about an internship he had taken at a U.S. university lab. I began searching for a similar opportunity. After sending over 500 emails, I landed an internship with Fermilab, one of America’s premier particle physics laboratories. That was my first hands-on experience in cutting-edge engineering. I knew there was no going back.

How did the idea for Hydroswarm come together?

For my doctoral studies at MIT, I started working with Ford Professor of Engineering Harry Asada on an underwater robot designed to look for cracks in nuclear reactors’ water tanks. One day, I was reading about contraband smuggling and I thought our robots could also search ships for contraband hidden in cavities or fake chambers.

It was only after the Malaysian Airlines flight MH370 went missing in 2014 that I realized how little we know about the oceans. What excited me, in so many ways, was that the challenges in deepwater exploration are so much more than in space, I think. I suspected our little robots might be able to work together to map larger areas and assist in rescue efforts.

What are some of the practical applications of your underwater drones?

Hydroswarm has a lot of potential for the future—from monitoring contraband to assisting in rescue missions and explorations, as well as inspecting nuclear reactor vessels to prevent radiation leakage. I would be thrilled if I can contribute something to make oceans and ports secure and safe. Particularly, incidents like MH370 have made me realize that we need to step up our technology to enable faster and more effective rescue operations.

What inspired you to start your nonprofit organization, Lab-X Foundation, and what are its goals?

The co-founders of Lab-X met at The Ohio State University and had the same story. We all came from small engineering schools. Why couldn’t we have stayed in India and built great stuff? Because nobody would have given us the opportunity to do something. I think, we are wasting a huge amount of human resources and talent we could put toward something much more innovative. That’s why we started Lab-X, to help other aspiring engineers get the chance to innovate.

Our goal with Lab-X is to create a culture of hands-on learning through internship opportunities, research demonstrations and workshops, student poster and exhibit sessions, presentations from diverse speakers, and more.

Do you have any advice for future engineers or students who share your interests?

Believe in yourself, don’t be afraid to try new things and do something you truly enjoy. Don’t say, “I’m terrible in math, I can never do engineering.” Try engineering; don’t be scared of it. Don’t give undue relevance to grades; in the end, it’s just a number out there. It’s really what you create with your hands and your mind that matters.