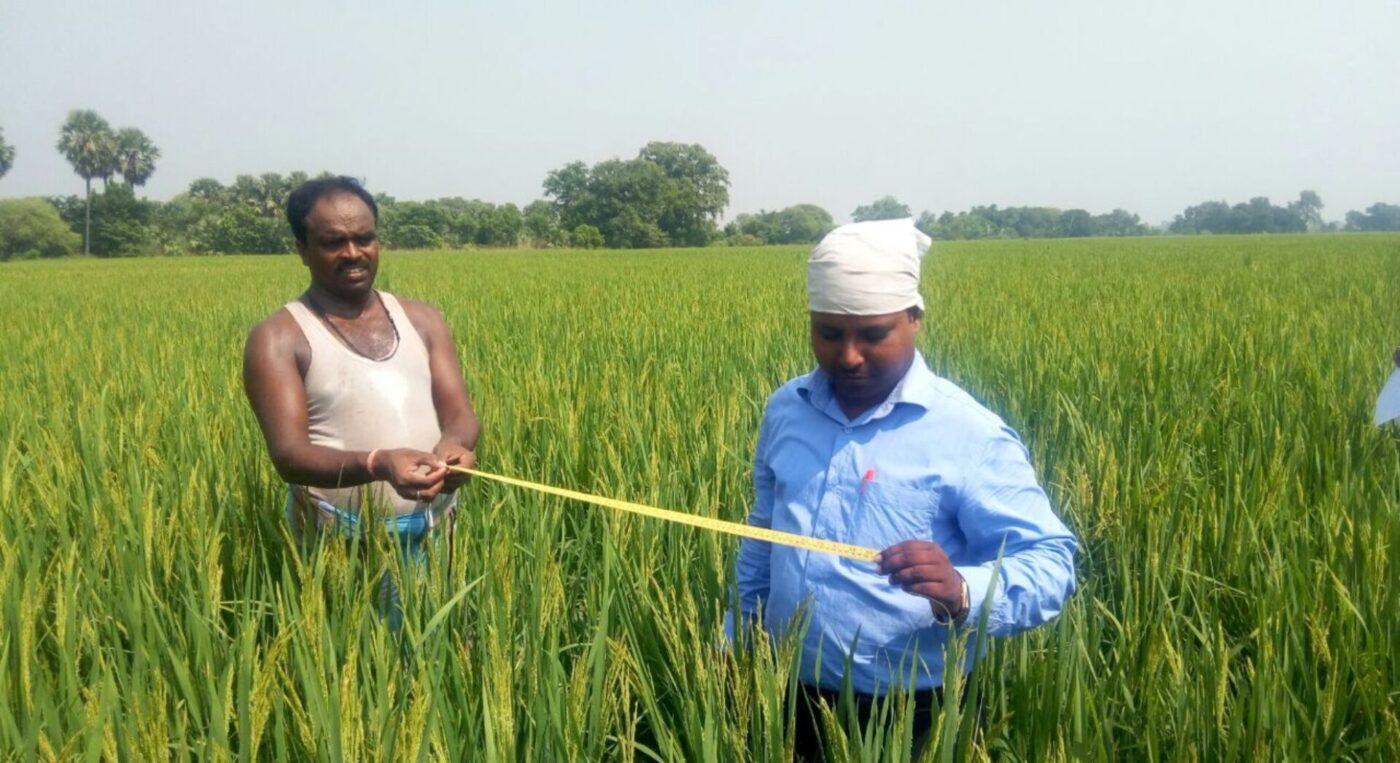 Increasing extreme weather events like storms, floods and droughts are a threat to agricultural production and food security across the world. It is, thus, important to minimize these effects of climate change to maintain agricultural growth and build a resilient food production system. To address these vulnerabilities of farming operations, the United States Agency for International Development (USAID) India funded the “Scaling-up Resilient Agricultural Practices, Technologies and Services in the Vulnerable Areas of India” project. The project adopted the “approach of developing climate-smart villages, which are villages where farmers, researchers, private sector representatives and policymakers have selected and trialled a portfolio of technologies and interventions to promote climate-smart agriculture,” says Vamsidhar Reddy, development assistance specialist at USAID / India.

The project, which concluded in September 2020, was implemented in Nalanda in Bihar, Betul in Madhya Pradesh and Mathura in Uttar Pradesh, as an intervention by CGIAR Research Program on Climate Change, Agriculture and Food Security (CCAFS), South Asia; the Borlaug Institute for South Asia and the International Maize and Wheat Improvement Center.

Through the initiative, “a range of resilient technologies, services and practices were designed in consonance with scientific knowledge and local needs that directly targeted the network of crop and livestock activities,” says Reddy. “Traditional agricultural practices are more focused on productivity,” he explains, “while climate-smart agriculture maintains a balance between productivity and sustainability and is integrated with its allied sectors.”

The USAID grant enabled CCAFS to take the climate-smart approach to 75 clusters of villages in the three states, where it administered capacity-building training, demonstrations and financial services support related to 16 climate-smart technologies in collaboration with the nonprofit organization BAIF Development Research Foundation, which worked as the implementation partner. Indian Farmers Fertilizer Cooperative (IFFCO) Kisan Sanchar Limited, an information and communications technology provider, delivered tips on new agricultural practices; information on livestock, markets and prices; and real-time weather forecasts to farmers through text and voice messages in local languages.

A baseline survey conducted prior to the launch of the project indicated there was limited use of climate-smart technologies like drip and sprinkler practices, seed and fodder banks, weather-based agro advisories, integrated nutrient and pest management and green manuring in the selected areas. “The application of resources, particularly seeds, fertilizers and water for farming operations were often of sub-optimal quantities, untimely and were even characterized by incorrect or unscientific application methods,” says Reddy. Additionally, the survey found the frequency and severity of weather-related risks from rainfall, high temperature, cold waves, frost and hailstorms were a prominent factor in the selected districts.

“The project used a wide range of activities that addressed the domains of crop and livestock management through promotion of climate-smart agricultural practices and technologies, capacity-building through institution-building as well as convergence with existing government projects and schemes to achieve sustainability,” says Reddy.

These included training on how to use water-smart technologies; changes in sowing and transplanting methods; use of climate-resilient seeds for wheat, paddy, bajra and gram; and integrated and precise nutrition management training. “Demonstrations related to seed treatment, efficient use of chemical fertilizers with biofertilizers and biopesticides, and practices such as rainwater harvesting, maximizing water use efficiency through drip irrigation, sprinkler irrigation, solar pumps and laser land leveling were promoted,” says Reddy. Significant modifications in agricultural practices like change in sowing methods were reported by 62 percent of the farmers who attended the training sessions. A majority of farmers used the weather and advisory services provided through the project—43 percent identified change in sowing dates as the most useful impact of the advisory services. Additionally, 27.5 percent identified use of natural pesticides or fertilizers, which resulted in an average reduction of 55 percent in overall carbon dioxide emissions per ton of crop production over the project duration, as one of the significant outcomes of the more than 400 farmer training sessions.

Given the negative health and environmental impacts associated with the use of traditional biomass, the project also worked on promoting the use of clean energy fuel for cooking by the farmers’ families. It introduced biogas plants to reduce the use of firewood and cow dung for cooking and encouraged farmers to practice kitchen gardening near the biogas plants. “I remember my daughter and I had to walk for up to two hours every day to collect firewood for cooking,” says Samantabai, a woman farmer from Betul district. “The biogas unit from the project has made my life a lot easier, and I now have more time to focus on my farm and family. Additionally, we now consume more vegetables harvested from my kitchen garden and dairy products from higher milk production.”

Bharat Kakade, president and managing trustee, BAIF Development Research Foundation, says that unlike many other projects which focus only on resilient agriculture crop systems, this project introduced “a combination of livestock resource-centric interventions such as improved breeding, scientific management, animal nutrition, feed and fodder management, climate-smart housing for reducing mortality and morbidity of cattle due to extreme climatic events and also improved the dung-based biogas model.”

The project focused on the establishment of institutions to meet the needs of farming operations, keeping in mind local requirements. “Through 13 custom hiring centers as well as three cattle development centers, the project has made climate-smart technologies, practices and services available to the farmers,” says Reddy. The custom hiring centers are owned and managed by women farmers, and lease machinery like automatic potato planters and portable solar irrigation pump systems at cost-effective prices while the cattle development centers facilitate sustainable livestock management practices. These centers are considered an indicator of the self-sustaining capacity of the project, where the cost-sharing approach for demonstration activities and entrepreneurship-based business models have generated significant incentives for the farmers to continue their operations as envisaged during the implementation stage.

The project adopted a resilience framework to define its outcomes and goals in the form of economic resilience, social resilience and environmental resilience. The climate-smart village project has achieved significant success in improving the economic and environmental resilience of rural agriculture-based livelihoods through enhanced productivity, profitability and efficient use of resources. An increase in overall crop and livestock productivity was reported by 87 percent of farmers who participated in the project and increased income from crop and livestock was reported by 89 percent farmers.

“The uniqueness of this program,” says Rajashree Joshi, chief thematic program executive, BAIF Development Research Foundation, “is women centrality.” Realizing that women are equal partners in smallholder family farming, efforts were made to mobilize women farmers and involve them in decision-making and all other stages of the project. “Multiple opportunities were created for increased participation, access to knowledge, representation, leadership and entrepreneurship by farm women. The choice of various technologies was based on women-friendliness and drudgery-reduction goals,” says Joshi. These steps helped empower 4500 women from the 75 clusters of villages.

The project implemented various water-smart interventions through convergence with government schemes such as Kapil Dhara Yojana, the National Mission for Sustainable Agriculture, and the Mahatma Gandhi National Rural Employment Guarantee Act. “Such convergence efforts facilitated the construction of check dams, bori check dams, ponds, and deepening of wells and enabled water access to farmers in dry seasons,” says Reddy. Through convergence with government schemes like Pradhan Mantri Kisan Samman Nidhi, farmers were able to avail the benefits of crop insurance.

The benefits of the project are not limited to the 75 clusters of villages where it was implemented, as other farmers too have adopted some of the practices that help create resilience in agricultural production as well as livestock farming.

“It is a duty of science and those who practice it to apply its principles for social action. Efforts to help a stressed planet while uplifting communities is one of the pillars of the climate-smart village approach,” says Pramod Aggarwal, regional program leader at CCAFS Asia. This project is an example of using this approach “to build resilience and enhance adaptive capacities of the community by transforming agricultural practices,” he adds.

“Climate and technology are extremely dynamic,” says Reddy “and thus sustained activities will be required to ensure that the transitions introduced during the course of the project keep up their pace to meet the new challenges that will emerge over time.”