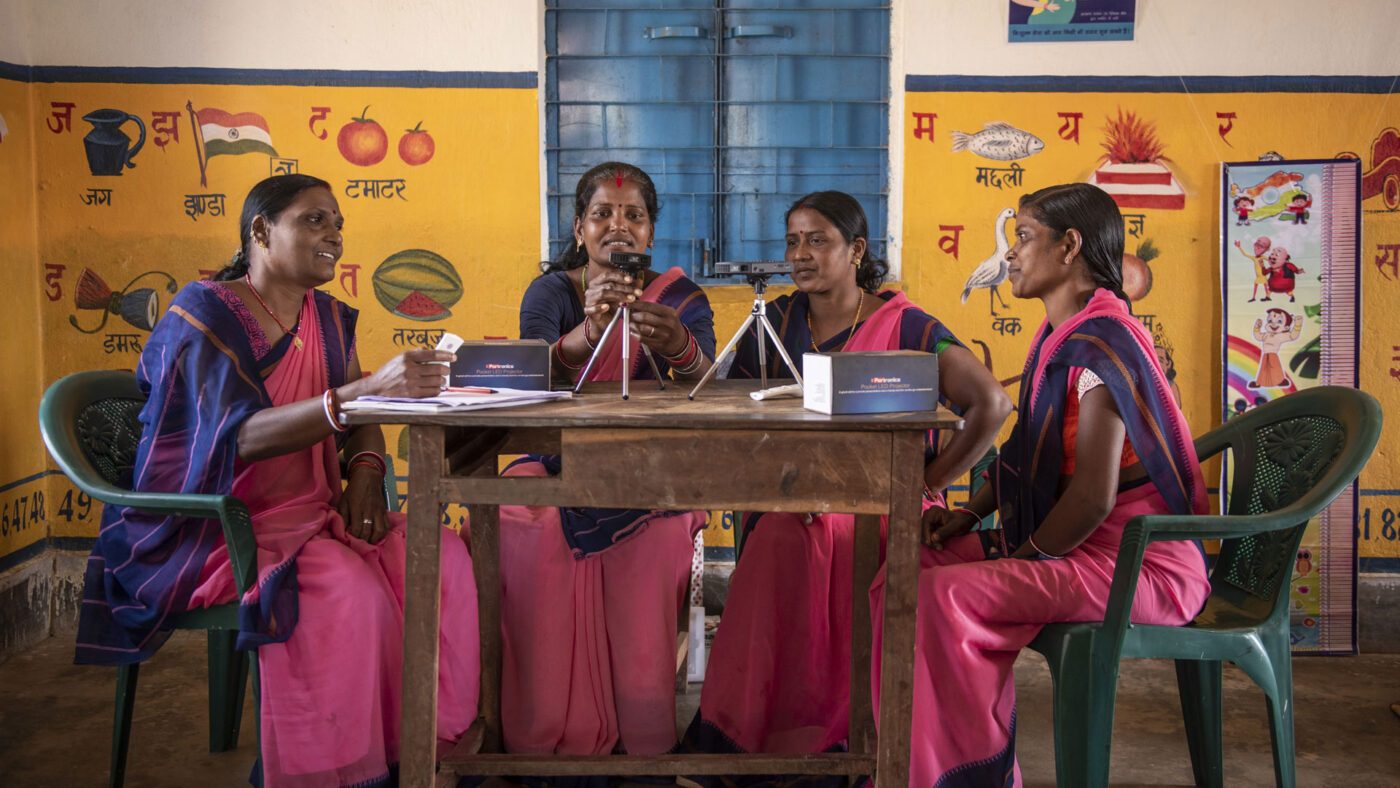 Health workers are trained to use projectors to screen videos on maternal and child health and family planning practices. Photograph courtesy Digital Green

Effective and timely communication is one of the key requirements for success of public health programs. It plays an important role in informing, influencing and motivating audiences about health issues. Building on this approach, Project Samvad uses the power of messaging and dialogue to change social behaviors related to family planning, maternal and child health, and nutrition in rural communities in India. The United States Agency for International Development (USAID)-funded project, implemented by Digital Green in six states, uses how-to videos to communicate its messages. Digital Green is a development organization with offices in India, the United States and Ethiopia.

Project Samvad taps into existing public and private outreach channels to target both women and men, especially those of reproductive age. It partners with state-level counterparts of the National Health Mission, the National Nutrition Mission, the Ministry of Women and Child Development, and the National Rural Livelihood Mission. It has also collaborated with other organizations, like Centre for Youth and Social Development and Gram Vaani, to complement the video-based approach with radio and interactive voice response system (IVRS) messages. Samvad Mobile Vaani, for instance, offers a combination of drama, testimonials and infotainment directed to change behaviors and prompt action. It also offers a two-way communication platform in which listeners can share their opinions and messages.

Started in 2015, Project Samvad has reached 600,000 rural women directly and 1.9 million family and community members indirectly across the six states of Bihar, Jharkhand, Odisha, Chhattisgarh, Uttarakhand and Assam. “The partnership with USAID and state government departments helped us double the number of people we had initially planned to reach,” says Ritika Pandey, project director, Samvad at Digital Green.

As part of the project, community-level health workers, like accredited social health activist (ASHA) workers and facilitators, are trained to produce videos in local languages. “The ASHA workers are closely connected with communities, and know about different health- and nutrition-related behaviors, as well as barriers and triggers that influence their behavior and uptake,” says Pandey. “They also help mobilize audiences to come and watch the films.” This collaboration is extremely important.

“In Digital Green’s agriculture-related videos, a demonstration of a technique works because outcomes like better crop yields and healthier crops are tangible results that can be seen,” says Pandey. “But health- and nutrition-related behaviors are more complex.” There are myths and preset approaches that must be addressed. “Besides, the role of community influencers and members of the family, like mothers-in-law and husbands, are very critical,” she adds. “We make sure we factor in all these issues.”

Project Samvad also trains frontline workers to use projectors and disseminate videos among women. “The videos are usually 10 to 12 minutes long. They are paused at strategic points for discussions around the topics,” says Pandey. An attendance record of all those who participated is maintained to assess how many people have viewed them. The videos, which dramatize best practices related to specific behaviors, are promoted in existing community groups in anganwadis or rural child care centers, couple counseling sessions, self-help groups, mothers’ groups, as well as on Village Health Sanitation and Nutrition Days (VHSND), which address health and nutrition concerns.

People are extremely open to the topics covered in the videos. “Since the community is deeply involved in the process, from story boarding to scripting, even men do not have a problem that their family members come to watch these videos,” says Pandey. “For the women, this is also a social event, where they can hang out with their friends and peers.”

The viewers generally have very positive reactions. “A video on family planning had a man who was shown to be very caring toward his pregnant wife,” she says. “Many women requested that this be shown to their husbands as well, since they would like them to be just as warm.” More than half of all viewers have adopted at least one healthy practice, with three to four practices being the average. Project Samvad’s government partners have also observed increased attendance in VHSNDs and immunization days since the project began.

“I shied away from taking the IFA tablets (iron supplements) fearing the side effects would hamper my abilities to take care of my household chores,” says a beneficiary from Chhattisgarh, on the Digital Green website. “At a video dissemination, the Mitanin Trainer noticed I had swollen feet and enquired if I had been taking the IFA tablets. She showed us a video about the importance of taking these tablets and how to tackle the side effects. This convinced me and I started taking the tablets and also shared my example with other pregnant women in my village.”