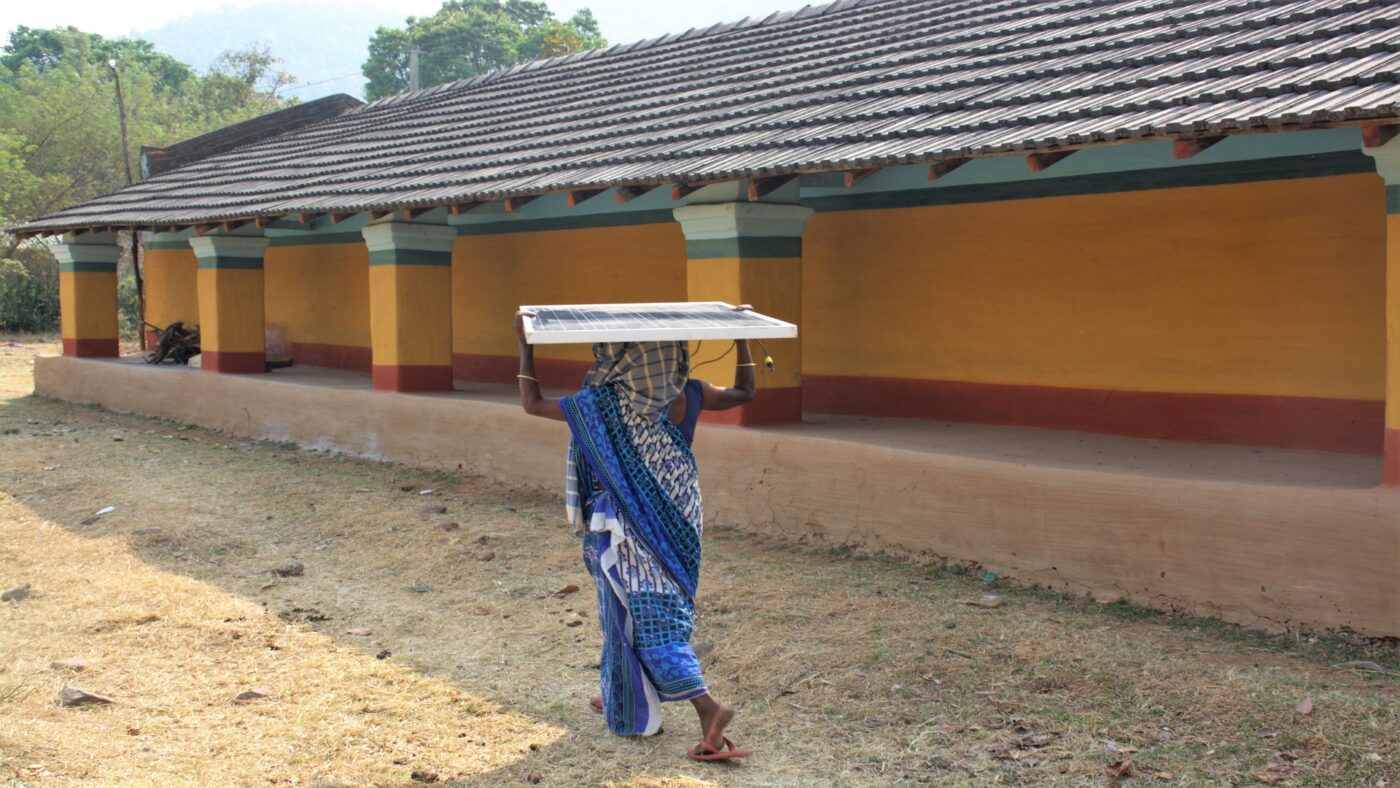 A woman carries a Khethworks solar panel. The efficiency of Khethworks’ groundwater pump enables it to be powered by smaller panels, making the system portable. Photograph courtesy Khethworks

Millions of farmers across India tend to an acre or less of land. Due to unreliable monsoons and the high cost of diesel or kerosene pumps, they are unable to cultivate their land throughout the year. Khethworks, an irrigation innovation company, has created a solar-powered irrigation system that enables small-plot farmers to farm all year round. Started at the Massachusetts Institute of Technology (MIT), Khethworks has been headquartered in Pune since 2016.

“In areas with poor or no electrification, the only options are to depend on monsoon rains, which are becoming increasingly inconsistent due to climate change, or fuel-based pumping, which is polluting and expensive,” says Katherine Taylor, chief executive officer and co-founder of Khethworks. This dependence on unreliable seasonal cycles and utilizing fuel-based pumping systems compounds problems.

“Farmers are forced to cultivate less land and to not cultivate in the summer season, a time when crops need the most water, but when market returns for the harvests are highest,” says Taylor. “Without affordable irrigation, the land lies fallow, and many farmers are forced to migrate for labor, leaving their families and communities behind.”  This creates a cycle in which less land is farmed, providing less income, allowing for still less money to be invested to farm available land. Over time, the cycle shrinks and the smallholder farms become increasingly unsustainable.

Khethworks has created a solution to this problem by developing a solar-based irrigation pump. “Irrigation is a great application for solar,” Taylor explains, “because the sunnier it is, the more water you get out.” In other words, by utilizing solar energy the availability of pumping corresponds with—rather than conflicts with—the sunniest summer season, precisely when crops need the most water. “We developed a solar pump system specifically for and with marginal farmers in eastern India. Our patented solar pump system is a hyper-efficient, portable, open-well submersible pump system,” Taylor says. “Our product provides affordable and sustainable irrigation, which unlocks year-round productivity, cultivation and income generation.”

Khethworks’ solar pump is portable enough to be carried easily but also has the capacity for a flow rate that can satisfy the farmers’ needs by tapping into their existing irrigation system. “Farmers carry the two solar panels, pump and controller from their homes to their fields, when and where they need it, across fragmented plots and scattered water sources, with no installation required. They connect the panels and pump to the controller, drop the pump in a water source, and push a button for water to flow,” Taylor explains.  There are no fuel costs involved and when the pump is not in use, it is small enough to be easily stored away.

Taylor and her co-founders developed this product as part of a Tata fellowship at MIT, a program designed to enable scientific talent to work on challenges affecting India. “Through this fellowship, we were able to travel to India and learn directly from the farmers,” she says. Here, the team learned about the need for affordable year-round irrigation, “which led to us working on this problem, and enabled us to develop a solution with input from the smallholder farmers we aim to serve throughout the design process,” adds Taylor. The patented technology emphasizes high efficiency that is also sensitive to power requirements and utilizes few solar panels, making the product both affordable and portable.

During the COVID-19 pandemic, the company’s productivity was affected, leading to less revenue from sales and delays in manufacturing. However, Khethworks made the most of a complex and challenging situation. “Right before the lockdown, we distributed systems to partners in different districts so farmers could use them free of charge,” says Taylor. “We also spent time in lockdown calling our customers and NGO partners regularly to check-in and to ask how we could help.”

Among the success stories of Khethworks, Taylor mentions Manoj and his wife, Shanti. “They were amongst our first customers,” she says. “Before using the Khethworks pump, Manoj was using a kerosene pump. He felt the fuel expenses for the kerosene pump were too high and his water source would not last the full summer season. After using the Khethworks pump, Manoj has increased his land size from 2 acres to 4 acres. With the Khethworks system, Manoj is making more money, has expanded his land, and spends less time on the work.”

Another success story is about how the solar pump can be shared among farmers. “Three female farmers in Orissa, Kanchan, Subhadra and Sarita, together purchased our pump in March 2021. Last year, they cultivated only chilis during the summer season, earning Rs. 8,000, using a watering can for manual irrigation,” she says. This past summer, using the Khethworks pump jointly, Kanchan earned Rs. 38,000, Subhadra earned Rs. 15,000, and Sarita earned Rs. 6,000. “This represents an over 7x increase of cumulative income in a single season,” says Taylor, “during which the pump system paid for itself.”