Progress in U.S.-India energy cooperation has boosted our economies and contributed benefits ranging from electrifying factories and powering the transport of agricultural products to improving the comfort and safety of our homes. 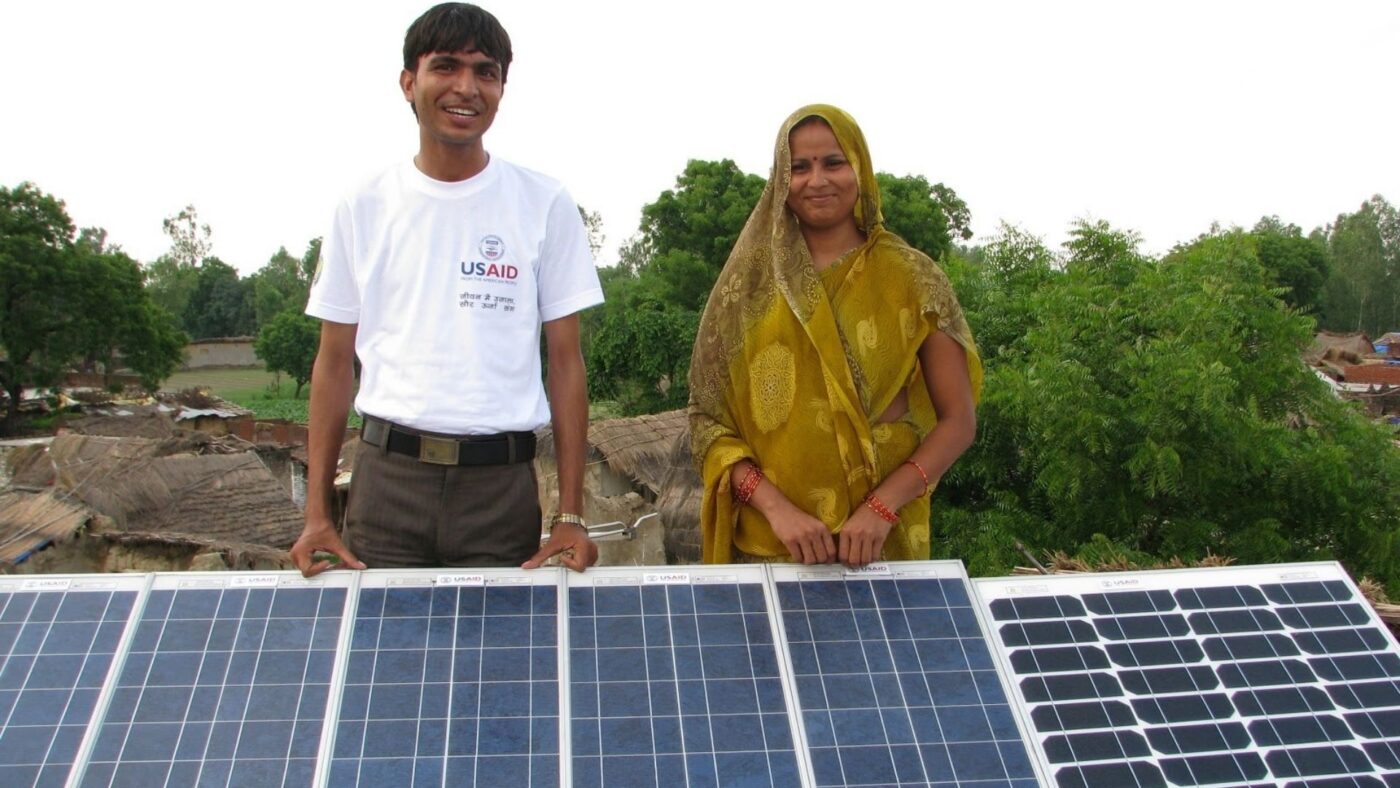 The United States and India have a long history of energy cooperation, bringing together the best of our people, our industry, our non-governmental organizations, and our governments.  These collaborative efforts across diverse forms of energy have powered economic growth and raised living standards.  Progress in U.S.-India energy cooperation has boosted our economies and contributed benefits ranging from electrifying factories and powering the transport of agricultural products to improving the comfort and safety of our homes.

Our energy cooperation has drawn on the talents and creativity of our peoples, and on the bountiful resources of our lands.  We have shared our innovation and our technologies with one another to produce and use energy in ways that brought opportunity to our nations.  Our success has given both of our countries the energy security needed to reduce external pressure or dependencies, and to preserve the sovereignty we value so highly.

U.S.-India energy cooperation in sensitive areas such as nuclear energy has helped build trust between our countries and fundamentally strengthen the bilateral relationship.  The successful conclusion of the 2008 U.S.-India Civil Nuclear Cooperation Agreement was also a key that unlocked many new forms of collaboration.

Today, our engagement in the field is extremely diverse, encompassing many sources of energy, private firms, government agencies, academic and research institutions, non-governmental organizations, and individuals.  Many of the benefits of our cooperation on energy have spread across the globe as we share innovation, join together in commercial ventures, expand supply, lower prices, and help preserve our environment.

A Long History of Energy Partnership

For over a century, Americans and Indians have been collaborating on energy.  The U.S. private and public sectors have been involved in some of India’s most complex and ambitious energy projects.  U.S. technology helped launch India’s first major power plant in 1902, the 4.5-megawatt hydroelectric power station near Shivanasamudra, in Karnataka.  This was followed years later by a nuclear power reactor (1969), an off-shore drilling platform (1976), a deep-water gas field (2006), the first utility-scale solar project (2009), and a grid-scale battery storage system (2019).  Major power projects in India, such as the Tarapur Atomic Power Station and Himachal Pradesh’s Beas hydropower project, benefited from U.S. support, and continue to generate power and contribute to growth today.

Individual Americans and Indians have also cooperated through technical exchanges, training, and knowledge-sharing.  For example, Indian nuclear scientist Homi Bhabha was elected as an honorary member of the American Academy of Arts and Sciences in 1958.  Cooperation has extended to academic institutions as well, including the Kanpur Indo-American Program, which paired U.S. and Indian universities to support energy-related academic programs across India.

Structured government cooperation on energy accelerated in the 21st century.  A major step was the launch of the U.S.-India Energy Dialogue in 2005, which promoted U.S.-India trade and investment in energy. 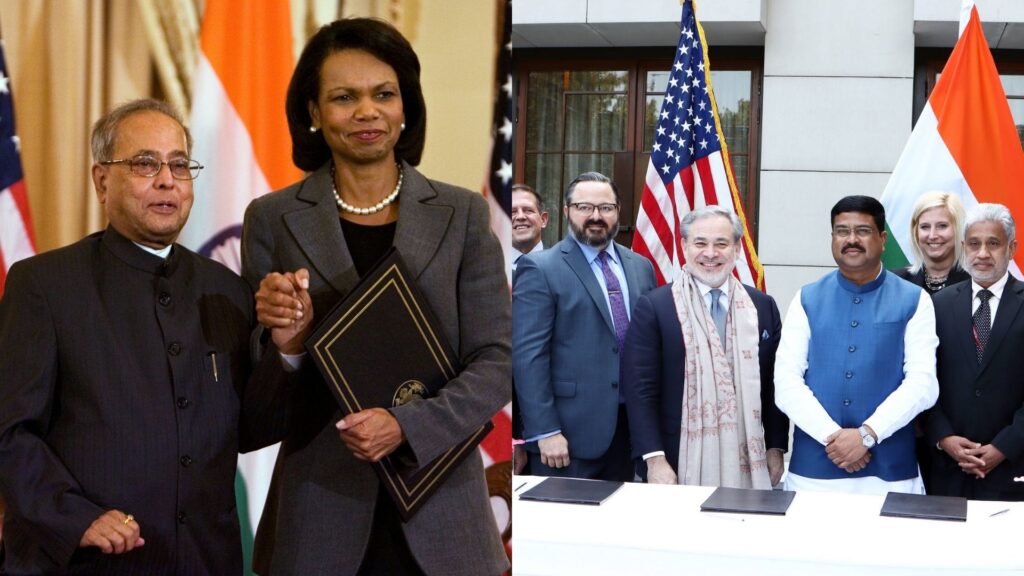 The landmark 2008 U.S.-India Civil Nuclear Cooperation Agreement established a legal framework for civil nuclear cooperation.  In reaching the Agreement, the United States successfully championed India’s case to the Nuclear Suppliers Group (NSG), a group of nuclear supplying countries that contributes to nonproliferation through multilateral export controls, in order to secure for India a waiver to participate more deeply in global civil nuclear trade.  The Agreement also expanded technical collaboration between the U.S. Department of Energy and the Indian Department of Atomic Energy, and enabled private-sector cooperation.  The United States and India formed a Civil Nuclear Energy Working Group, which focused on issues such as advanced steel for light water reactor applications and hybrid nuclear/solar driven-electricity.

Progress Since 2017:  A Strategic Energy Partnership

Energy ties have expanded in the last few years, through both private sector and government collaboration, blossoming into the U.S.-India Strategic Energy Partnership (SEP).  The highest levels of the U.S. and Indian governments have supported energy cooperation, launching new initiatives and highlighting successes in joint statements after meetings between Prime Minister Narendra Modi and President Barack Obama, and between Prime Minister Modi and President Donald J. Trump.

In 2017, President Trump and Prime Minister Modi elevated the bilateral energy relationship with the announcement of the SEP.  It was formally launched a year later by U.S. Secretary of Energy Rick Perry and Indian Minister for Petroleum and Natural Gas, and Steel Dharmendra Pradhan, and prioritized cooperation in oil and gas; power and energy efficiency; renewable energy; and sustainable growth.  The SEP has expanded energy engagement through both government and industry channels.  The first major activity launched under the SEP was the U.S.-India Gas Task Force.  This Task Force convenes key stakeholders to identify opportunities for gas sector growth and market reforms that will accelerate the deployment of natural gas.  In addition, the Task Force provides for public-private dialogues on trade and investment issues to support the Indian government’s goal of increasing the share of natural gas to 15 percent of the primary energy mix by 2030.

The SEP Ministerial in 2020 reviewed progress at the two-year mark, led by U.S. Secretary of Energy Dan Brouillette and Minister Pradhan.  Among the SEP Ministerial’s achievements were new efforts on strategic petroleum reserves, a public-private Hydrogen Task Force, new PACE-R research on advanced coal technologies, and a commitment to incorporate gender-focused activities across technical cooperation, such as the South Asia Women in Energy platform.

Recent progress in U.S.-India energy cooperation has also increased commercial ties between the countries.  Today, there are over 100 U.S. companies of varying sizes with a presence in India that are connected to energy.  These firms work across all elements of the sector, including power, oil, gas, petrochemicals, nuclear, renewables, biofuels, and energy-related goods and services.  U.S. investors have also acquired stakes in India-registered and operated companies that are active in the domestic energy sector.  Altogether, billions of dollars in investments have been made by U.S. entities across the Indian energy sector.  At the same time, Indian firms have invested billions of dollars in the U.S. energy sector, including in shale oil and gas.

In recent years, the U.S. and Indian governments have supported new initiatives, and expanded existing ones, to broaden energy collaboration.  The U.S. Department of Commerce coordinated energy-related trade missions between the two countries to help U.S. firms explore opportunities in India in sectors such as smart grid energy storage and nuclear energy.  The Commerce Department also helped Indian firms look for opportunities in the United States in fields such as natural gas.

Feasibility studies and pilot projects supported by the U.S. Trade and Development Agency have helped Indian and U.S. companies involved in energy infrastructure and other work across the hydrocarbon and power sectors.  These efforts support innovations such as “virtual gas pipelines,” which involve alternative modalities for transporting natural gas to customers beyond the reach of existing pipelines.  The U.S. Department of Commerce’s SelectUSA office has connected Indian investors with opportunities in the United States and helped address questions about U.S. regulations and other issues. 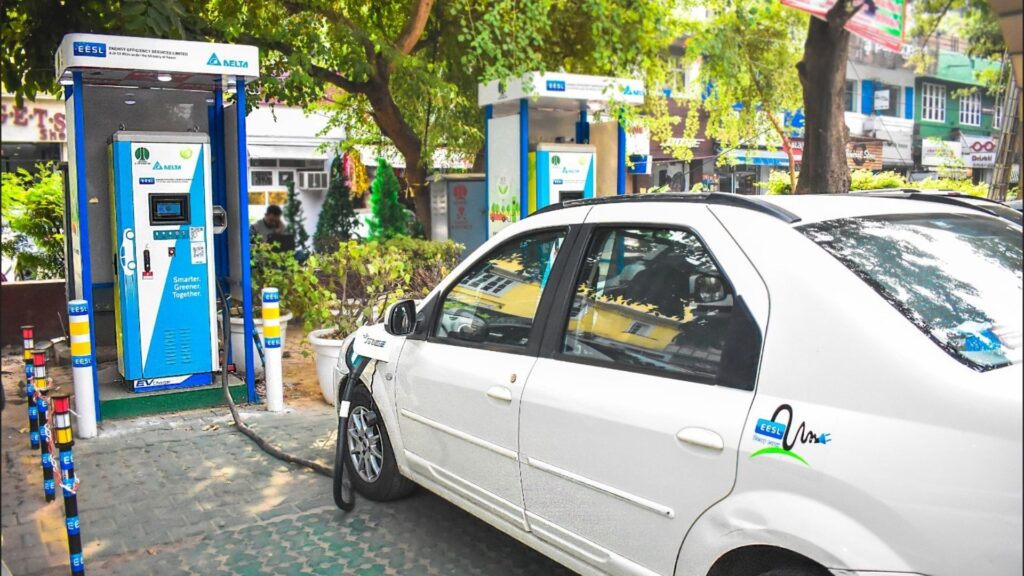 The United States and India collaborate on renewable technologies, such as the use of electric vehicles. Photograph courtesy USAID India

Launched in June 2020, RTMs are a mechanism to ensure buyers and sellers can trade electricity from anywhere across the country on short notice, a critical step for a more efficient electricity network in India.  USAID supported CERC’s efforts to model market simulations, coordinate international knowledge exchanges, and create RTMs, which are now expected to bring better energy efficiency to almost 40 percent of the total power traded on India’s exchanges. 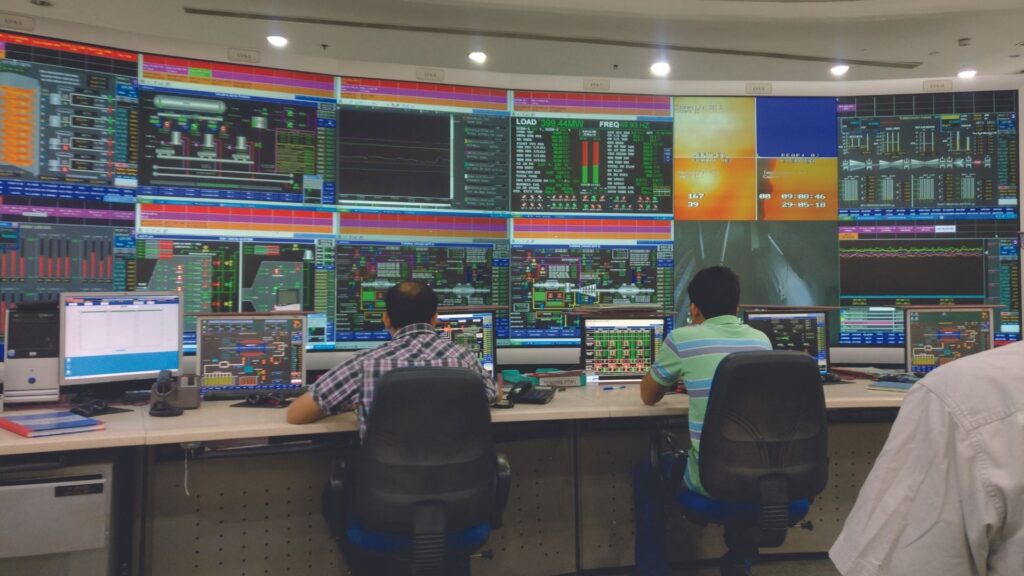 As India’s economy has continued to grow, the U.S. government has also collaborated with Indian partners to develop more energy efficient buildings.  USAID’s Market Integration and Transformation for Energy Efficiency initiative supplied analytical models, funded pilot technology projects, and shared global best practices with India’s public and private sectors on energy efficient technology.  This helped increase transparency and improve competition in bidding, resulting in more energy efficient buildings.  The U.S. Department of Energy supported a related effort to develop a “Building Innovation” guide for achieving high-performance office buildings suited to the climatic, cultural, and construction context of India.  The guide has subsequently been disseminated at the local, city, and state levels to policymakers, engineers, architects, and academics across India.

Looking to a Bright Future of Energy Partnership 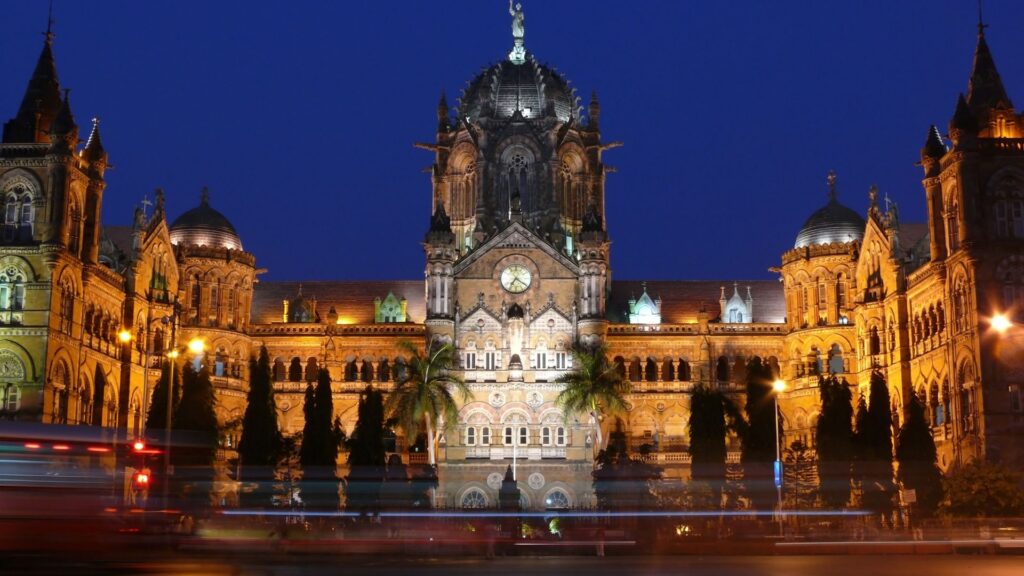 The United States and India have a long and productive history of powering growth and development in both countries through energy cooperation.  As in other fields of cooperation, we have benefited from a wide range of talented individuals, committed institutions, and innovative firms.  As democracies, we have done so with the responsibility both to support our development and to protect our natural heritage.

OSI, a global leader in real-time electric grid management technology for utilities, has steadily expanded its trade and investment in India over the last decade. It has brought advanced U.S. technology and expertise to India’s energy market, improving energy efficiency and boosting both of our economies. This American company first applied for Supervisory Control and Data Acquisition tenders in three Indian cities in 2010. It expanded its cooperation with Indian partners in 2012, thanks to an Infrastructure Trade Mission organized by the U.S. Department of Commerce. Over the years, OSI has grown further and successfully signed several deals in India. OSI’s increased activities and partnerships have led the company to open a global engineering center in Bengaluru in 2019 to support research and deployment of OSI projects throughout India, Asia, and the Middle East.

USAID worked with India’s largest power utility, NTPC Limited, to create the Centre for Power Efficiency and Environmental Protection (CenPEEP). CenPEEP has subsequently run 355 demonstrations of improved coal use practices, such as non-destructive testing methods for critical components in coal-fired power plants, coal blending, and heat-rate improvement guidelines for coal power plants. Demonstrations at NTPC Limited facilities by CenPEEP introduced U.S. technology to India, such as new solutions for condenser cleaning in the power sector. CenPEEP’s efforts, along with other USAID-supported work in the field, have helped India avoid 99.1 million tons of greenhouse gas emissions, and saved the use of 78.2 million tons of coal, worth $1.5 billion over 16 years.

Trilliant Networks has worked with an Indian partner to deploy smart power meters across India. The partners won a contract from Energy Efficiency Services Limited (EESL) for the rollout of smart meters across Haryana and Uttar Pradesh. Trilliant and its Indian partner have already deployed one million smart meters and are working to deploy four million additional units. The meters use U.S. technology to substantially reduce transmission and distribution losses, and improve revenue collection for Indian electric utilities and power distribution companies. As India moves forward with its planned deployment of 250 million meters nationwide, Trilliant will continue to partner with Indian companies, demonstrating how U.S. innovation can support India’s economic transformation.

The U.S. government has worked with Indian partners from government, private industry, and the non-profit sector to promote best practices in energy efficient buildings. The results have improved energy consumption in India and set an example for the world. For instance, the IGBC, the government of Andhra Pradesh, the Pirojsha Godrej Foundation, and USAID supported the development of the CII-Sohrabji Godrej Green Business Centre, the first LEED Platinum-rated green building in India. USAID and IGBC supported the Bureau of Energy Efficiency in developing India’s Energy Conservation Building Code, which has been used across India. In 2018, IGBC and USAID launched the Net Zero Energy Buildings program to improve energy efficient construction in commercial buildings in India.